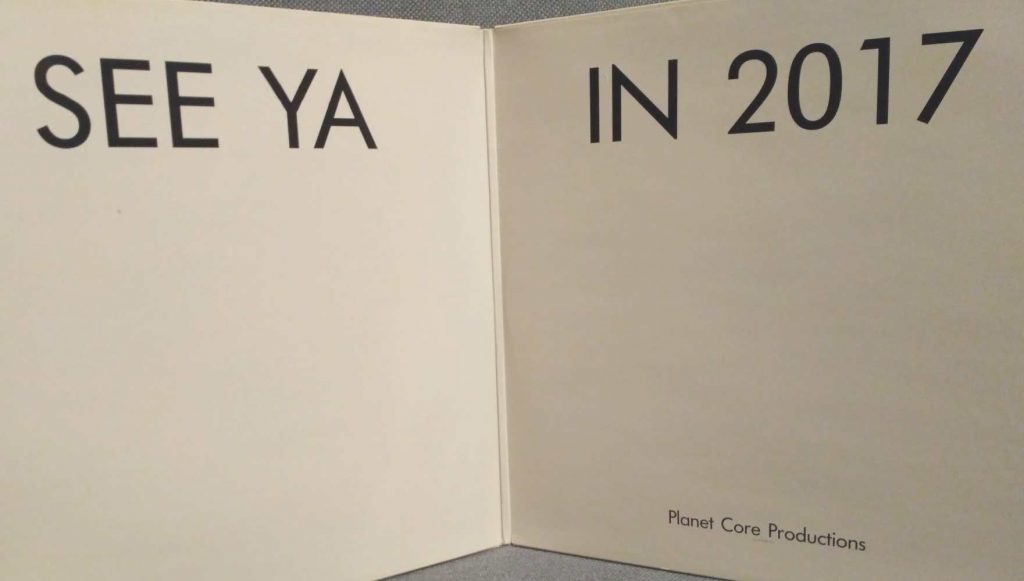 Before the year 2017 breaks out, it’s time for a blast from the past that brings us to the present day. To start from the beginning, in 1991 I was pretty sure that techno can’t get much harder than Holy Noise, Interactive, Marusha, Channel X, T99, etc., because I wasn’t aware of what was happening in Detroit or Chicago and didn’t connect Baby Ford’s “Children Of The Revolution” to the acid house boom that had swept over the UK. This belief lasted to the very moment I heard for the first time Mescalinum United‘s “We Have Arrived”, which initially came out already in 1990 and on one lucky day I managed to grab it to a tape from the Finnish Radiomafia station.

Immediately, I was sold to the new, harsh sound and the first half of my nineties was filled with pit bull tracks originating from Frankfurt, a city that back then was seen as cradle of depression and evil because of its cold, banking-centred spirit, high crime rate and drug abuse – some of these elements interrelated.

Mescalinum United was one of dozens artist names and its home base Planet Core Productions, or PCP, seemed a hardcore techno conglomerate but actually most of the job was done by one man, Marc Trauner aka Marc Acardipane who was restless both in conceiving wicked sounds and inventing project names under the PCP umbrella. Trauner’s main consort was PCP’s co-founder Thorsten Lambart and people like Miroslav Pajic, Ramin and 303 Nation guys Fernando Sanchez and Patrick Vuillaume helped to push the label forward. The back catalogue is really worth exploring and before going for a stroll on Discogs, I suggest to check Shawn O’Sullivan’s mix for Secret Thirteen with several PCP tracks.

In 1992, white label compilation “See Ya In 2017” was a kind of pre-release of the third volume of the legendary series “Frankfurt Trax”, with a slightly differing tracklist. The compilation was a goodie box with ruthless bangers from the Frankfurt crew: Ace The Space‘s hoover assaults, Nasty Django‘s desperado hardcore, 303 Nation’s acid showers and so on. My favourite cuts were “The 2nd Coming” by Mescalinum United and T-Bone-Castro‘s “I Want Cha”, although the “Women Here Part 2” version found on “Frankfurt Trax Vol. 3” was even better.

PCP was also connected to Frankfurt’s (hard) trance scene because DJ Dag and Sven Väth appeared in the compilation and Ata, Pascal F.E.O.S. and, last but not least, Uwe Schmidt aka Atom Heart collaborated on some releases.

The only thing I never understood about PCP was their affection for drug-related symbols and expressions, which is obvious when taking a closer look at artist and release names. However, it did not stop Sony’s sublabel Dance Pool to take care of the gang’s several compilations.

Acardipane and pals left an immense footprint in techno’s evolution and their empire was faring well to the mid-nineties, being also remembered for the notorious gig at Mayday 1993. As the years passed, PCP’s batteries gradually drained and Acardipane went on to launch in 2001 Resident E Recordings, which output was a bleak shadow of previous efforts. However, around this time a clear exception was The Mover’s excellent album “Frontal Frustration” on Tresor, released in 2002. As live performer, Acardipane still perfectly knows his trade – a recent proof comes from the Thunderdome Die Hard event in Amsterdam.

But what’s the story with the year 2017? Already Mescalinum United’s seminal 1990 EP was titled “Reflections Of 2017” and the same reference popped up on several occasions. PCP’s message to the future has not been deciphered yet and there isn’t any proof of its special meaning. The bets have gone from total apocalypse to alien landings and as of today we still have to face the unknown of the next year. We can only hope that Turbulence’s “Disaster Area” would rather describe the passing year…

Frankfurt-born hardcore wrote an essential chapter in techno history and for further reading I suggest the online book “PCP – Legends In Their Life”.