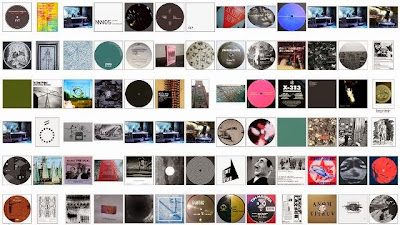 A belated 2013 EOY list because the best-of rankings are mostly compiled from the end of November. However I decided to pick some tracks by artists and labels that caught Terminal 313’s attention in 2013. Here we go, in no particular order.

Semantica had another productive year, including an EP by Eduardo De La Calle. “Quasi Calligraphic 09” is a definition of the beauty in techno.

When the previous was a beauty, here comes a beast: In 2013 Ancient Methods dropped another hard-as-nails EP on the self-titled imprint and made remixes for Skirt and These Hidden Hands. A live PA at  the Kõue Heli Festival in Estonia was my personal culmination of the year.

A LP by Violetshaped (Violet Poison + Shapednoise) was a highlight from the darker realms.

Terrence Dixon‘s talent is finally noticed when the Detroit producer is having very fruitful time, concluding the year with the fourth LP, titled “Badge of Honor”. However “Pacers” from a split 12-inch on Polytone might have been his most floor-friendly track in 2013.

The Trilogy Tapes had a stunning year in search of innovative sounds, Eomac feeling the spirit of warehouse and mask hysteria.

Trensmat Records from Ireland hears a note in every noise and put out a number of releases between experimental drones and acidified floor cuts, here an example by The 15 Dead Minutes.

You won’t be kidding with Berceuse Heroique, like in a piece of alzheimerhouse by L’estasi Dell’oro drugged by Unit Moebius Anonymous vs Shitcluster.

Although Ron Morelli’s L.I.E.S. missed the Grammy shortlist, almost everything touched by the label turned gold, with Florian Kupfer, Vereker, Torn Hawk and many others. Beau Wanzer, a jackmaster from Chicago, had an impressive debut year.

London techno trooper Perc prefers industrial playgrounds, launching Submit offshoot and crowning the year with excellent “Feral Grind” compilation. “405” is his own track from a joint compilation with Pole Group.

Finland’s Samuli Kemppi had a very productive year with releases on Chronicle, M_Rec Ltd, SCR Dark Series, etc. His and Juho Kusti‘s weekly Deep Space Helsinki radio show is most recommended listening to those interested in new and classic techno.

Finnish artist Teersom made a convincing debut on Sähkö’s Keys Of Life sublabel.

Last but not least: Rabih Beaini’s Morphine Records, with releases by Container, Charles Cohen and Metasplice.