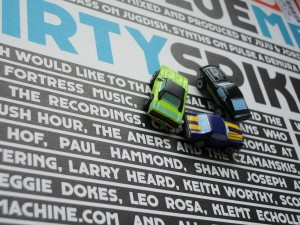 Juju & Jordash are Gal Aner and Jordan Czamanski – two Amsterdam residents who met for the first time in Haifa at end-1990s, have produced their first longplayer that is colorful like a greengrocer’s stand at a Jewish market. The self-titled album kicks off with “Deep Blue Meanies“, an easy-going tune with hit potential walking down the house boulevard with a hint of bleep in the mind. Then comes “Jugdish” that seeks entry into a chill out room and showcases Middle East roots with folk instruments and occasional piano. After the B-side of melodic deep house for joyful late night clubbing, we get to the second slab of wax and are immediately encountered with more speed. You are thrown into an oscillating sea of sounds full of energy that beam you up to euphoria. “Dirty Spikes” comes with extra drums and “Jazzy Trance” with a sax. The D-side slows down and flows along with bits of acid and jazzy trumpet (“Niks”).

The record is a creation by cosmopolitans who have not forgotten the piano teachers from their early years and friendly folk instrumentalist from the neighborhood, but also have taken up exciting musical influences from both sides of the Atlantic.