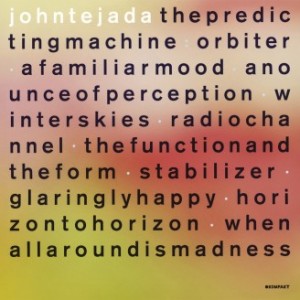 In the last decade John Tejada’s productivity was something to match, making it pretty difficult to keep track of his numerous publications. Compared to the previous he moves at a considerably slower pace, with not so tense schedule and has found a new home label with Kompakt, where he released LP “Parabolas” last year.
For “The Predicting Machine” the question was if it is not too predictable? Because of Kompakt’s recent shift to pop-electronica, I had the fear of being encountered with a compromise product. The tonality of the LP is rather smooth but all other worries are largely unfounded. Emotionally laden, feel-good album offers a cozy shelter from techno domination.
Surrounded by the soft-spoken atmosphere Tejada endeavours also to versatile fields, opening up to the influences from various (sub)genres of the electronic music. If we only take the robotic modulation “Orbiter” or “An Ounce Of Perception” which reveals Tejada’s attraction to space disco. For a jazz-tinged roller choose “A Familiar Mood” and crisp and clear arpeggios don’t leave any doubt “Winter Skies” is the only possible name of this particular track. “Radio Channel” enters the scene with a calm drone and distant voices, “The Function And The Form” is carried by dubby chords and the combination of bass and snares in “Stabilizer” feels inspired by the Warehouse years.
For the 11th full-length the Austrian-born producer has managed to present a mature-sounding album carried by urban romanticism.