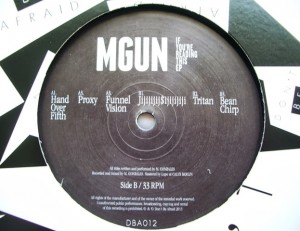 MGUN’s message is clear: If you are reading, feeling, breathing this EP, don’t be afraid of Detroit’s economical decay spilling over to the city’s musical heritage. Motor City’s MGUN aka Manuel Gonzales is a fighter and proves it particularly with his second release on Semtek’s imprint, after “The Upstairs Apt. EP” in 2012.
The six-tracker is like a journey through different music spots. It starts with abstract late-night intro “Hand Over Fifth” and nothing predicts the storm arriving with “Proxy”, a vintage-minded acidic bubble bath compounded with raw modulations. Mighty drive continues in blackout-heralding “Funnel Vision” with highly efficient set of percussive elements and synth leads.
On the B-side, in unpronounceable “Jijijijij$ijijijiji” electro/hip hop beats are slamming from cabrio subwoofers for a sweet cruising in the streets of Miami whereas in “Tritan” translucent pads and vaguely shimmering Detroit chords take us to the realm of deep house. For the end, gloomy chords and kicking drums lend “Bean Chirp” a robust touch, only the track is too short.

MGUN, an insider of Detroit sounds and a co-performer in Submerge’s Timeline and Interstellar Fugitives collectives, is a true keeper of the 313 traditions – rather with the mindset than sounds, where he is open for influences and ideas outside the birthplace of techno. Happy to have this record.