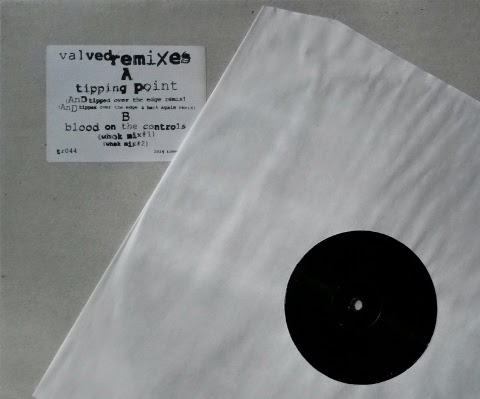 Early in 2014, not many might have noticed Valved’s “Blood On The Controls”, a limited-run cassette album on Trensmat’s sub-label Nute. Valved, dedicated to industrial disaster sci-fi techno, has now found a fertile ground for further body and mind manipulations when Trensmat drops a noisy 12-inch of remixes, featuring industrial techno stalwart AnD and the label’s maverick family friend Whirling Hall Of Knives.
For a better perspective, the digital bonus tracks serve as a good starting point, both of them representing Valved’s original versions. Offbeat percussive hell in “Tipping Point” and distortion-torn synth bath in “Blood On The Controls” set the tone for the ride to come.
The actual release starts with AnD’s experimental “Tipped Over The Edge Remix”, a beatless but bone-crushing drone-fuelled piece. In “Tipped Over The Edge & Back Again Remix” AnD recovers the previously lost drum beat for a battering builder touching the fringes of hardcore. On both occasions it’s interesting to see AnD in adventurous mood, enjoying the realms outside the usual 4/4 kick.
WHOK’s first remix of “Blood On the Controls” comes with a thrusting synth line, driving up blood pressures at crusty conventions and for the second it collects tinkling pogo beats from DAF era, flooded with industrial ooze. A stunning mental dash to the hard side.