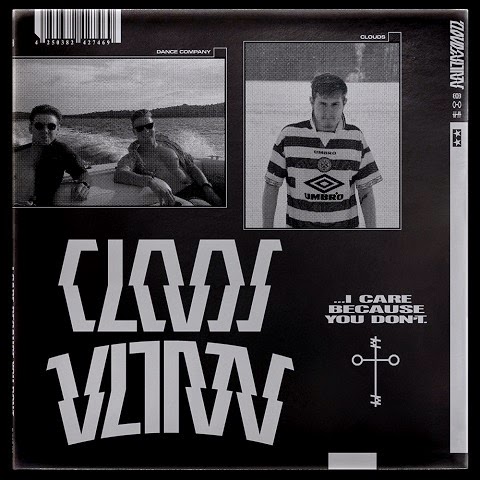 Scottish two-man techno act Clouds has found an inspiring haven in Canada when they have released the debut album and four EPs, including two takes of “Tannhauser Acid Works”, on the Montreal-based Turbo Recordings. Now Calum Macleod and Liam Robertson are ready for another round, this time as curators of “I Care Because You Don’t”, a massive rollout of UK hardcore stabs and electro hop. Current four-track sampler is an appetizer for a full compilation, out at the end of October, and in addition to early UK influences, the sampler recalls the sounds of long defunct Pharma label.

Rogue beat session opens with “Roll Up Your Sleeves, Welcome to the Dance” by DJ Hesburger (fellas, do you know there is a Finnish burger chain called Hesburger?) while in “Berzerkerz (Hardcore Young Team)” Dance Company goes back to the foundations of UK breaks.

At first instance, Clouds’ own industrial stepper “Blood Skating” sounds like Aphex remix of Curve’s “Falling Free”, but considering the title allusions (remember “I Care Because You Do”?) and fresh comeback of Richard D. James, this is more than justified. Jane’s “Fuck Your Alliance”, going like a struggling machinery on drained batteries, signs off the sampler with estranged acid pulses and dissonant beats.

What concerns Turbo and its boss Tiga, I had been somewhat misled ever since the Canadian emerged on DJ Hell’s Gigolo with sweetish electro cover of “Sunglasses At Night”, performed with Zyntherius aka Jori Hulkkonen. By the way, it is a cool tune. But for a long time I sincerely believed Tiga and Turbo keep cultivating electroclash only, which is not true.