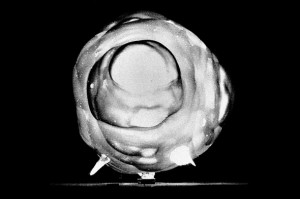 Everybody hopes that ‘nuclear winter’ is just doomsday fiction actually not going to happen whereas a piece of vinyl titled “Nuclear Winter” is a stimulating undertaking, executed by NYC producers DJ Spider and Marshallito for the London-based The Trilogy Tapes.

In the first instance, DJ Spider equals shuffled techno stompers with a pinch of funk, mostly appearing on his own label Plan B Records. His pal Marshallito’s home is fittingly named subBASS Sound System, a label that has seen three collabs of the two producers.

After “Deadly Structures”, the current EP is DJ Spider’s and Marshallito’s second joint effort on Will Bankhead’s label and one can expect seismic beats when the two enter the arena. The title track is really a bass membrane test where linguistic talent is required to guess the origin of the exotic voiceover. The winding track gets quite close to deep house, containing jazzy passages and chant of the natives, in overall sounding like a field recording on board of a Brazzaville-bound train.

Severe analog bounce continues with “Geiger Count” where odd strings and bells resonate over tormented bass line, forcing a dislocated Martian spaceship to pledge NASA ‘we need your help’. Ferociously pumping “Zero Point” goes really under the skin, a cut of rancid synth buzz where at the mid-track vocoded street preachers emerge, gradually sinking into vast hold of modulations. When the smoke cedes, the annihilation is total.

Mind-blowing material, cementing The Trilogy Tapes as one of the most forward-thinking labels of our times.