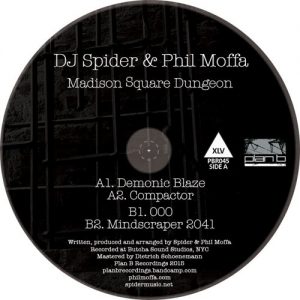 Established in 2008, Plan B Records is a true New York City powerhouse run by DJ Spider and Lola aka Dakini9 who have supplied many of the label’s releases. In the same, they have hosted a number of techno and (deep) house producers, if to recall only Amir Alexander who dropped wonderful deep house EP “Sonic Subversion” last year.

DJ Spider, whose sound can be described ‘dirty’, spelled with admiration, has a penchant for collabs, either with Marshallito, Hakim Murphy or Franklin Da Costa, to name just a few, and for the catalogue number PBR045 the label frontman rejoins forces with NYC-based electronic musician Phil Moffa.

In the new EP, the batteries are fully charged across four tracks, recorded and mixed in the Butcha Sound Studios in NYC. The outcome titled “Madison Square Dungeon” can be categorised as ‘techno’, but on several occasions one could feel discovering the inner house slave during the tracks that come with a truckload of funk in its best formation.

The opening is raunchy when battering drums launch “Demonic Blaze”, a melting pot of megacity passions and woes. Splinters of noise, shrill alarms and mechanical rhythms add up to a cocktail from the urban jungle. After such a demonic grin, “Compactor” is seeking the common low frequency with aliens, when dehumanised voices are echoing over rough dubs, giving claustrophobic shivers.

The B-side opener crosses the checkpoint to the desperado tribal when broad, Moodymann-style groove opens “000”, an unhinged hardware jam with bits of spoken word. The closing track “Mindscraper 2041” is choleric, drony ambient from the future foundry where the insectoids have taken over the control.