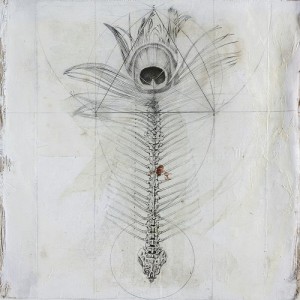 An ambitious new beginning for Dadub’s Daniele Antezza, properly launching the Inner8 alias with a twelve-track opus on the new label Undogmatisch. A Berliner since 2009, Antezza belongs to the city’s ever-growing community of Italian electronic artists and Dadub, his project with Giovanni Conti, has been one of the main pillars of Stroboscopic Artefacts.

In my view, the said duo has been standing for deeper, dubbed out sounds with a portion of clicks and cuts and it is not surprising that Antezza’s solo effort keeps distance to the four-to-the-floor action. In the same breath with Inner8, you may mention Edanticonf, Mogano, Drøp and many other fellow artists exploring the foggy side of electronics.

Antezza’s aim is to approach the production from a sound engineering point of view and to juxtapose with commonplace architecture of today’s electronic music, a quite challenging task in which he succeeds on several occasions.

The inclusion of thinly built ambient etudes (“Eudaemonia”, “Disambient”, “Moto Asintotico”) is very expected, as are the genuine dub techno cuts “Exploitation” and “The Paradox Of Authority”. From a different angle come ethnic influences, like Oriental voices and laborious drums in “Daimon Anthem” and even more in two parts of “The Irony Of Karma”, both driven by tinny percussion and mutilated loops known from Nation Records (e.g. Transglobal Underground, Recycler).

In “Violence”, Slavoj Žižek makes an unintended guest appearance and black leather needs to be worn for “Praxis”, which is a fast-paced stepper with industrial flavour. Especially in the digital format, the tracks closer to the end may get less attention, but here it would mean a grave mistake as Hypnotic “Ataraxia (feat T.C.O.)” is a real conqueror with resonated sequencing and spoken word in German.

Written by Antezza in 2013-2014, the album is also a collective effort with the album mastered at Dadub’s own Artefacts Studio and artists like Mirco Magnani, Ken Karter having been part of the process. If looking for a live experience, Inner8 will be among the artists performing at Krake Festival in Berlin in August.