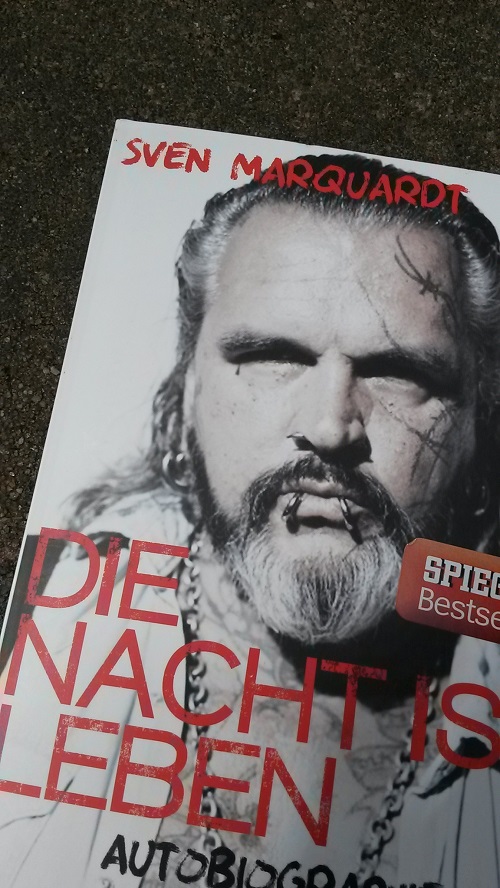 The gatekeeper orders to have patience of over two hundred pages. So long takes it, from the flashback how Frau Erblich, a classy photo model in her seventies, sadly lost her memory and afterwards never appeared in the photo shoots of Sven Marquardt, to the last chapter titled “How To Get Into Berghain”. Yes, thousands have asked the same question from the friends and taxi drivers, browsed the internet forums and eavesdropped the scene insiders for “How To …?”.

When no one else than Berlin’s photo artist Sven Marquardt, known as unpredictable and strict Head Bouncer of Berghain, gives an account of his life so far, the expectations of revealing the door secrets are high.

But before the entry, one needs to queue up and go through these two hundred pages of “Die Nacht ist Leben” (“The Night Is Life”), a book co-authored by Judka Strittmatter. The story is about Marquardt’s 50+ years from his childhood and youth in Eastern Berlin, that time the capital of the Eastern Germany (DDR), to the present days in a global metropolis. The book offers mostly a peek into the punk and gay scene, both seen by the DDR authorities as very despiseful phenomenons, and a testimony of Marquardt’s own artistic evolution as photographer.

Marquardt was among the very first DDR ‘celebrities’ in the West, because in the first free issue for the unified Germany, the Stern magazine depicted Marquardt sitting next to a Volkspolizei officer, in a photo shot by late Jörg Knöfel.

Having been a party animal since the 1980s, Marquardt’s arrival at the club door was not entirely a coincidence. Because his half-brother Oliver, known as DJ Jauche, invited him to try out the job and so it started, through illegal one-time parties, Suicide Club and Snax, up to the notorious Berghain.

Which reminds about The question. Marquardt underscores that at the door they work as a team, although the final nein! or yes! is given by him. And they do send people off, because “we are not Mother Teresas”. The crew expects that the people getting in do not cause any trouble and will fit into the atmosphere, and, take it or leave it, the verdict comes by appearance. “And for me it will be also fine to have a lawyer from Charlottenburg, wearing double-breasted suit and coming with a Gucci-Prada lady. If they both make a good impression to me, just get in”, admits Marquardt.

A lot can happen during the people’s night out and the same applies for queuing up at Berghain. Luckily, it is not the only club in Berlin, making it easier to digest a turn-down.

Buy the book (in German)