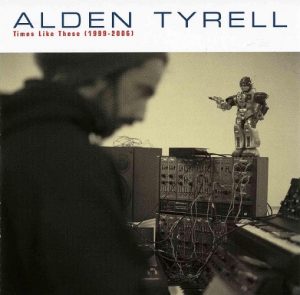 As DJ and producer, synth-obsessed Alden Tyrell has been a stalwart of the Rotterdam’s Clone community and remains active to the present day, despite of releasing (the first) retrospective already in 2006.

By that time, Tyrell had become a renowned artist in the world of neo-italo and electro disco, who was providing energised tracks for curing the eighties homesickness. “Times Like These: 1999-2006” collected several of Tyrell’s previous tracks on Clone and Viewlexx, including synthetic party starters such as “Knockers”, “Disco Lunar Module” or “Love Explosion”.

Of other tracks, “Odessa Theme” is a charming movie score, “Rendez-Vous at Rimini” bears the substance for a Pan-Riviera nightlife hit and “Phaze Me” would boost nostalgic feelings of italo survivors in 2050.

For me, “Times Like These” was one of the highlights in 2006 that still gets a lot of playtime. As ten years have passed, the time could be ripe for the second collection of Tyrell’s works – there’s something to choose from.