DUST OFF: Digital Justice – Theme From: Its All Gone Pearshaped (Fragile Records 14 – 1996) 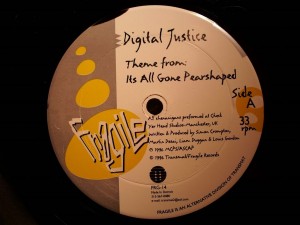 A release from 1996 that feels like having baptised the Transmat sublabel – two fragile, extended sound excursions that hover between ambient and trance. In fact, it’s pure and deep chord-driven Detroit techno with dub motives, like we know from John Beltran or Aril Brikha. With only one difference: drum machines were not taken into the recording studio, although four grown-up British fellows behind the Digital Justice project wouldn’t have any trouble to carry the gear.

But they coped perfectly without beats and created a 34-minute record that would easily qualify as a LP. The title track was first issued on Robs Records on 1994 and after the release on Fragile, we haven’t heard much about the authors. Current one is really a beautiful piece to remember. The type of music to be enjoyed during the sunrise on dewy meadows.