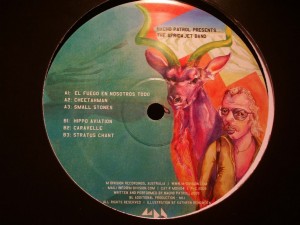 For this occasion Danny Wolfers AKA Legowelt is king of the jungle, under the Nacho Patrol moniker. Dutchman’s fantasy in inventing cool artist names is boundless. More impressive is his ability to control all the music machines and produce tracks that are retro-sounding and contemporary same time.
As Nacho Patrol he pours gallons of funk to the discomobile’s tank, steps on it and let’s the fun out. “El Fuego En Nosotros Todo” is a powerful start and my favourite here. Psychedelic and etherial mood set in the first track carries on throughout the release. In “Cheetahman” we encounter a chimpanzee that imitates classic jazz funk. “Hippo Aviation” adds a few drops of ample jack and “Caravelle” is a nice tune to listen to while peeking through the window of a intergalactic spaceship.
The Africa Jet Band release is a sibling of dusty records from the 70’s and 80’s but despite of partial recycling this 2009 release sounds exciting and very refreshing.