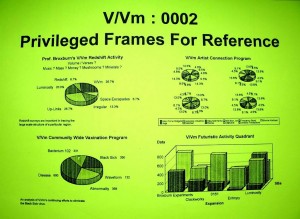 Back off, keep off – this bunch has to be isolated from the society because it’s not music. It’s terror. And it’s error. V/Vm is like 100-watt light bulb that attracts all kinds of weird insects. Purgatorian parasites and bugs gone berserk crash your ear canals and paint their graffitis inside: “V/vm was here“. You get no sleep after listening to this mayhem.

Noisy breakbeat opens the B-side, folllowed by Sherpa’s “Expedition”: Not music but a mode of being with spooky voice fragements and sounds that are uttered by the space garbage. Before the end, Mild Man Jan, who is not a mild man at all, throws in some solid BPMs again. Spheric sounds round off the release that in its entirety shakes you. Uh-uh…
The record is from 1996 but sounds very fresh.