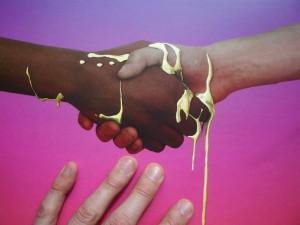 The clash of the guys equipped with laser swords, one side for both of them. Low Limit loves a dirtier mix of electro and dubstep, experimenting with rhythms and varied percussion. All three tracks splatter like fountains in front of the cheering old school fans. “Where You Been 7.0” is a full-on bomb constructed with a kind help of chemical beats and real ghetto flavor. A bit like Modeselektor and Puppetmastaz in a jam session.
Lando Kal is smoother and believes that house and broken beats together can create magic, especially in the first track. The following, “Exotic Jesus”, could be a definition of dubstep symphony. Easier we go in “Fuzzy Ankles” that concludes this side with a mysterious ballad performed by the machines. Much faster though, if you decide to experiment with 45 RPM.
A bit inconsistent and partly overdone first release of a new label that has really put some efforts into the artwork. Handful of old musical influences are mixed into one pot here but you taste also some fresh ingredients.