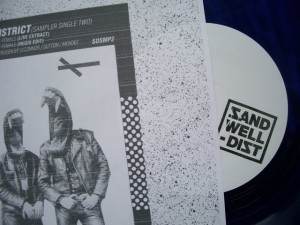 Enron would never have been collapsed if only the auditors would have been as precise as Silent Servant, the artist behind untitled opening tracks on both sides. Linear and controlled techno that sticks to hypnotic repetition but refrains from glass-shattering kickdrum assaults. It belongs to the same league of ozonized tracks known from Jeff Mills’s SITS series, but is too predictable to be outstanding.
A1 goes straight ahead like torpedo cars on the Lake Bonneville,  with inhuman voice samples and an atmospheric passage at the end. B1 follows the same dry minimal patterns and is not too far from Ian Pooley’s Silvershower tracks on Plus 8 (1996).
If you are looking for variations on this release, the contributions by Downwards stalwart Female are your thing. Being in experimental mood, he concludes the A-side with a beatless shoe-gazing. Then B2 is a highlight with spiraling groove that is put on slowly but surely drilling beats. And yes, it’s edited by Regis. Decent stuff.