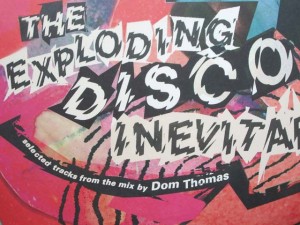 After a diving session in the deep waters of exotic disco and funk, Dom Thomas has brought to the daylight a selection of more and less glittering corals. It’s not the return of golden oldies but a parade of unknown cuts and edits mainly smelling so end-1970’s.
The man from Finders Keepers camp kicks the party off with tikka masala flavour in “Karma Sutra Vocal” and India sends greetings also in Bollywood-sounding “Disco Bomb”. Oriental side is further represented with two tracks full of ample oriental funk, titled “Eastern Fractal”, and extra-drums cut “Pictures Of Phuket”.
Like from the workshop of Black Devil or Cerrone comes space disco jam “Synths Under Paris” while “Will You Spare The Words For Me?” is a deep female vocal contribution (who is she?). “Gin And Tonic” is a rolling tune with Swedish disco singing and large funky orchestration. Despite guitar and violin playing main role in “Electronic Dance”, this vaudeville is about fabulous…electronic dance.
“Flight 3”, my favorite, carries psychedelic atmosphere with tight funk and space drone, and extended “Disco Workout” is painted with echoing voices and familiar samples. “Monolythic Drums”, a heavy percussive jam, and a folk-minded noisy composition called “Kazoo Minus” conclude the story.
This compilation is a smart reuse of classic dance sounds to show how multi-colored the world of disco was.