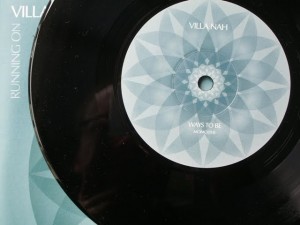 1980’s coming back again, signals Villa Nah, a Finnish duo to support Orchestral Manoeuvres in the Dark’s comeback gigs in the UK this autumn. Group’s first album, “Origin”, is just out and current seven-inch gives a taste of the larger format, both songs found also in the album version.
A-side’s “Running On” is a new wave song with soft pads and simple arrangements. The singer tries too hard to impress with charisma but does not sound very convincing. Instrumental version would sound pretty good, was my conclusion when the singer took a break and let the synths play.
On the flip, “Ways To Be” is not new and was released at Villa Nah’s home label Keys of Life in 2009. Technically an “old” song but very enjoyable for anybody who values OMD, Heaven 17, Blancmange – you name them all. Here the vocalist goes really under your skin in a right-paced and catchy composition. Can be danced cheek-to-cheek.
As a full Finnish affair, the band is co-produced by Jori Hulkkonen who also before has flirted with 80’s (as Zyntherius, performing “Sunglasses At Night” with Tiga) and has turned more into synth-pop in his recent creations.
Villa Nah: “Ways To Be”