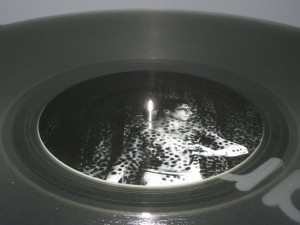 Derrida coined the term hauntology that in the electronic music has been  extended to the productions of Mordant Music and Ghost Box. Although the term refers to a ghostly theme, this 12-inch would not exactly serve as a soundtrack for creepy movies. Hauntologists, a series launched by Jay Ahern and Stefan Schneider in Berlin, has advanced to the third release that offers the same formerly known ample, undistracted sound work hovering between techno and house, in a deep and dark atmosphere.
Knobs have been turned and FX used on the A-side to create a saturated and deep sound palette. B1 is as mysterious where only the  laser swords are throwing shadows on the dark walls. It would attract artists like Sleeparchive, Torsten Pröfrock or Mika Vainio to show their remixing talents.
But the third track is clearly the highlight – tension-packed B2 charges in a powerful way, marching along with hi-hat assistance to create a hectic feel. Old school pumping techno that still remains composed, is merged with a likeable groove.
Once Josh Wink praised the first Hauntologists EP in the Groove magazine and I’m also very happy with the second one. B2 is the winner of the latest addition, but the rest is lagging behind the former releases. Not to speak about Cheap And Deep.