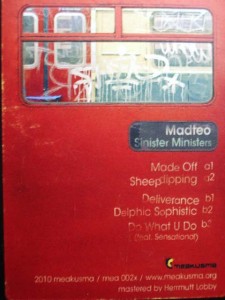 The music on this record, issued in January this year, is like a fata morgana. You see something hovering in the air, then get closer, but the only thing you can touch is emptiness. You think you can get it easily, but no. This is the true style of Madteo: Nothing is too apparent.
For example: The playing speed of the record. “Made Off”, that in many sound samples runs on 45 RPM, and “Sheepdipping” feel irritatingly slow – fiddling with pitch control would add new angles to the thing.
All five compositions move along deep and sinister electronica where A-side carries somewhat academical feel – cinematic vocal samples may derive from an earnest psychology professor with horn glasses. Also slight melancholy (“Delphic Sophistic”) can be found, but my choice is uptight “Deliverance” with disintegrated bass and beats, just a small bit reminding of dub techno. “Do What U Do” is an hip-hop joint for the end, with MC assistance by Sensational.
After having pre-listened the EP on the web I was impressed, but the actual record had to be tested by turntables several times to make clear that “Sinister Ministers” is a decent record, although it occasionally resorts to commonplace sound textures.
Belgian label Meakusma is a fine address: For the start an impressive compilation “Rüts”, thereafter Terrence Dixon found his way to the label and most recent signing is disco-esque act [sic!].