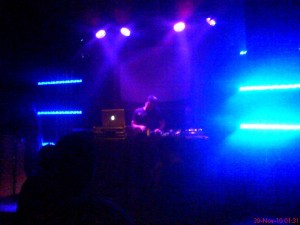 Yesterday Tallinn’s club nation had something to choose from: King Britt at the Club Privé, Leo Young at Mutant Disco in Sõprus Cinema and in the Korter Dave Clarke, the fixture for all “tech heads and electro whores” (quote: krtr.ee). Rotermanni area in the Tallinn city is becoming an artery of social life and there is also Korter running a mixed selection of club nights.
Around 23:00 the music was already flowing with local Anders Melts AKA DJ 4-Got-10 at the controls. Being the front man of Estonian industrial band Forgotten Sunrise, his fondness of EBM and machine sounds was clearly audible. The set was very energetic, occasionally close to electroclash.
Then another local, DJ MRDS, had his turn, mixing (minimal) techno with several dub techno tracks and, for the cheering crowd, I-F’s classic “Space Invaders Are Smoking Grass”. During his set a lady with different gadgets started to fiddle on the equipment, to set up the stage for the night’s star performer.
Dave Clarke started at 1:30 immediately stepping on it with heavy bangers, creating a stark contrast with MRDS’s dubby finale. It felt like at the peak of a hard techno set and no time for a warm-up was given to the enthusiastic crowd. DJs travel lightly nowadays and also Clarke’s “record case”, i.e notebook, carried an illuminated apple sign – it was a surprise that he did not use any vinyl. The mixing was seamless and almost none of the tracks, or even cuts, lasted more than one-two minutes. He processed the material perfectly and put a lot of energy in to the set, allowing some sample flashbacks to his own productions.
Clarke’s set was harder than expected, although calmed down a bit after a storming introduction. Some bits of Basic Channel tracks and electro passages offered some change. It was nice to hear him again and thanks for coming to the North.