The return of living cassettes 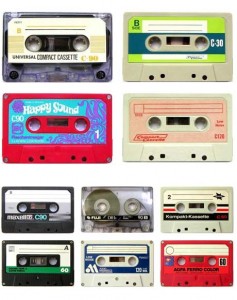 Mp3 and FLAC are taking over the world and it makes to believe that the future of music lies in digital format. Retailers are struggling with CDs, tagging the them with new and new “sale” labels. Laser disc seems to be the biggest loser as the vinyl output is steadily on the climb and worshippers of pure analog sound are increasingly numerous.
Good, e-music is sweeping all over the place. But with a trend comes anti-trend – to become later a trend itself. Now, when browsing new arrivals at the web shops, I have had a feeling that some of the new electronic and rock music is released on cassette exclusively, often as limited editions and special artwork.
You need facts? When tracking down Donato Dozzy’s new album I looked at the website of Seattle-based Further Records, just to see that in 2010 they have had several cassette-only releases by Anders Ilar, Shemale, Public Safety and others.
Also a number of specialized labels have sprung up, for example Scotch Tapes. Today I learned that “10.10.84”, a recording by Tangerine Dream founder Conrad Schnitzler, is exclusively out as cassette-only on Mirror Tapes.
For a while I have considered buying a tape deck, preferably with USB slot, to digitize some dusty MCs from my archives. The resurgence of the format thought to be obsolete means that tape equipment would also have use for new music. After all, tapes could provide rather good sound quality and depending on the style, a lo-fi feeling would not do any harm.