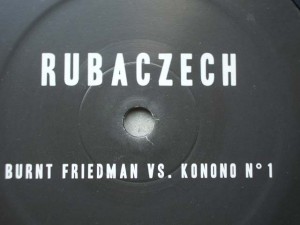 “Rubaczech” may sound like surname of a Czech ice hockey player but the foundations of this release lie elsewhere, in the lands the humanity derives from. “Rubaczech” is a creation of Konono N° 1, a congolese collective that mixed native and electric instruments with sounds of old car parts.
Konono N° 1 was widely unknown till Congotronics album in 2004 and a LP-box of the same name this year, that featured several acts from the country walking along the thin line between tribalistic folk music and electronica.
Now the track has undergone a treatment by Nonplace Urban Field man Burnt Friedman who largely maintained the textures of original’s soft electronica. On the A-side delicate percussion and warm voices characterize Shackleton’s take of “Mukuba Special”, made by another African combo Kasai Allstars. It’s a track deriving from Black Continent’s heritage full of rhythms and in the same bearing sunny smoothness. The second half turns more psychedelic with mingled chaotic voices and an array of stingy percussion elements.
Both sides lean towards reduced dubstep and give a promising start to a new label that essentially helps to coin a new style called “congotronics”. Calling it just “tribal” would be too simple and even misleading. Nice African-European bridge built here.