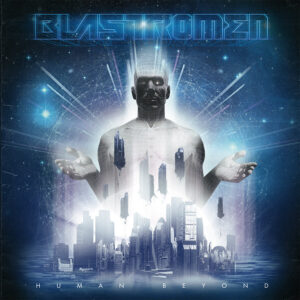 Ambassadors of blue light have descended on the Earth. They glimmer, they roar, they vibrate behind the controls and are full of microchips, delivering a message of electro. No sterile gloved research in a secluded lab, but a demonstration of spectacular blazing energy to the world.

The first album of the Finnish act Blastromen starts up a party and captures the floor with vocoded vox, melodic layers and hectic breakbeats. Cold and beautiful title track “Human Beyond” sets the agenda, then the pace is upped in “Battlenet”. Vocoders speak and machines breathe in Oriental-sounding “Follow The Command” and in heavier “Computer Simulator”. “Sky City 1000” would sound well in an après-ski party in the Alps. No really weak links among eight tracks, but some do stand out and therefore EP format with less tracks would have worked well too.

Blastromen will have a lot of dedicated fans who appreciate its live performances, as seen on Youtube. Electro is music with attitude and can be either expressed with motionlessness, like Kraftwerk or Dopplereffekt, or with rocking live sets, like Auxmen or the same Blastromen. When I look at them it’s like Batman and Robin in futuristic outfit driving the crowd mad. These Finns with illuminating uniforms have style.