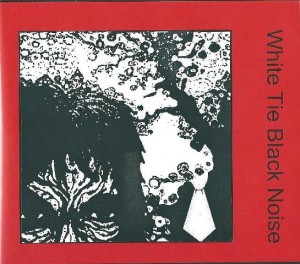 Gloomy twins have arrived. Two CDRs, as separate releases, full of noise and experimental sounds by EDASI. But the twins are not identical. While “Night At The Museum” could be effectively used in interrogations to make people confess anything to anyone, the other one can be used for other purposes. If to leave noise aside, the other CDR “White Tie Black Noise” offers several good finds. My favourite is “Die Lügenrächer” that features small ugly creatures that have dragged along own vocoder from a distant planet, to ride through nine and half minutes on subtle percussion and licking drone, occasionally like V/VM.
Then “Horror Mirror (Original Version)”, by name like a creation of Hammer Studios, but calm as forest lake if compared to the rest. Again of solid length (16:51), it vibrates through time and space in electro-acoustic mood.
In “Unknown Critters” you meet some abandoned souls in jazz salon. Undulating composition of strings and percussion in “Missanigra” and “Kalt Und Gefährlich” grows into a trip of distorted drumming. Yes, distortion is everywhere.
And the there’s noise. The fury in unleashed in long and painful “Riders Of Apocalypse On Speed” with screams and cacophony amidst dark shoegaze feeling. “Eisener Besen” is pure carnage and “Detsembrikuumus” (“December Heat”) does not stay much behind.
In Estonian edasi means forward, a word that relates to avant-garde. The artist behind EDASI is Mihkel Kleis of Luarvik Luarvik fame. The CDRs are published by Estonian scene insider Trash, as continuation of three compilations last year (see “Sügis“).