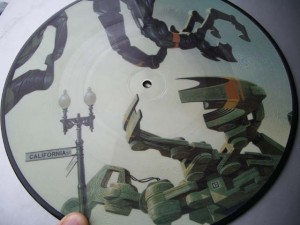 It was a Friday night and a Star Wars sequel was showing on mute. It was because a new arrival from Ebay that had found the way to the turntable and the speakers emitted sounds that perfectly matched the sci-fi scenery of the movie.

Yes, “Robot Wars” on the screen and in my ears. Although the picture disc issued in 1994 by Sm:)e Communications is not an ultimate outer space soundtrack, it is a thriving piece of metallic acid-hop. Since 1991, Cem Oral and Ingmar Koch have produced as Air Liquide loads of classy music, to mention the album “Abuse Your Illusions” and many others.

Air Liquide’s electro-infected and acidic output was among the outstanding productions of the 1990s, but it seems that the duo switched off the machines in 2004. Oral and Koch were more known as Jammin Unit and Walker and both had also dozens of different monikers.

“Robot Wars” could have worked also for Starship Troopers III, aired next on the TV, but the flick itself was too much for me…