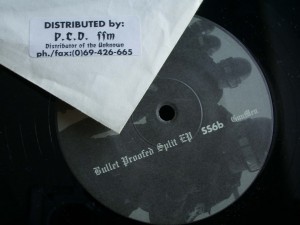 Armed with distortion and brutal bass, cold-blooded commandos rush to annihilating mission. It’s always midnight in their world as they strike and put everything into pieces.
These grim sounds are transmitted from the year 1993, on Super Special Corp. that was one of dozens of labels run by Marc Trauner, the mastermind of the Frankfurt school of hardcore. It’s the only release featuring artists Distortion Bastardz and GunMen, which might have been also another alter egos of Trauner, who knows.
A1 fills two minutes with evil distorted drone that is like a stretched-out intro. Then A2 goes straight down to the business with brain-drilling bass drum slammer that some people might call extreme dumbness. On the flip GunMen delivers two tracks of pure old school power. Effect-filled B2 has some touches of hardtrance, so popular about the same time, but drums are the boss.
Interesting fact that Uwe Schmidt (Senor Coconut, Atom TM) was involved in the label that was officially shut down in 2001.