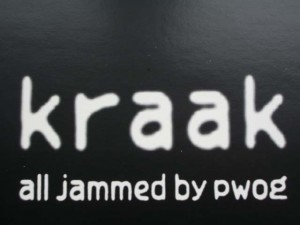 In 2011, Dadavistic Orchestra has won many hearts and minds with two beatless LPs in a series called Dokument. For some members of the group – Reinier Brekelmans, Tim Freeman and Robbert Heynen – it was not the first time in the frontline of intellectual electronic music. In the beginning of 1990s they were part of Psychick Warriors Ov Gaia (PWOG) that led the evolution of tranced-out ambient, for example with “Ov Biospheres And Sacred Grooves …”, an album worth treasuring.

From PWOG’s later phase comes “Kraak”, which does not float on deep blue waves, but navigates in stormy seas. “Kraak 1” spits distortions and EQ-effects from the throat of techno behemoth and the rumble goes on in “Kraak 3”, a mechanical, throbbing 12-minute monster, which reminds of the output by Perc Trax and other current industrial techno pals. In between, “Kraak 2” is the closest to ambient electronica, a beatless track on alien vox and spheric loops, with a generous portion of abstractness. Heavy duty transmissions from PWOG.