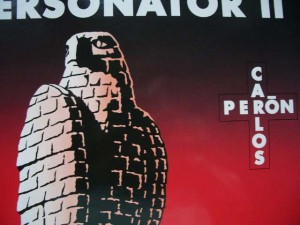 This record is just screaming out loud: welcome to Bela Lugosi disco. The horror screen hero himself makes a posthumous appearance in “Galadiner With Boris The Vampyr”, in a track from the extreme end of the album, which is full of filthy EBM and industrial with mashed voices and vocals.

Lugosi is not the only celebrity here when the voice of Dieter Meier (Yello) appears in another macabre piece titled “Happy New Year”, also written by him. Meier’s input is not surprising because Carlos Perón, the mastermind behind the album, was part of Yello in its Jurassic phase and left the band in 1984 to pursue his nocturnal operations.

The first beats in “A Dirty Song” make clear that here we face twilight, underlined by theatrical vocals by the Canadian Jaymz Bee who sounds like a younger brother of Alan Vega. Hysterical “The Hate Song”, black leather boogie “10.000 Zippers” and “Commando IV” will appeal to any Gothic dance floor. If we add manic synth staccato in “Popt In Riga” (Hello Latvia!), ready is an occult ceremony led by Dr Faustus of the industrial scene. Perón’s following years were very productive, with a number of albums that seemingly follow the same dark paths of the 1988 release.