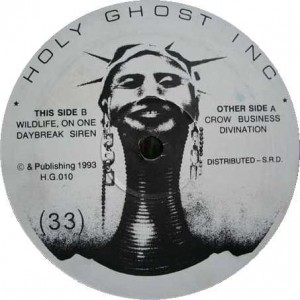 The year 2011 saw a group called Holy Ghost! publishing an album on DFA, but techno’s history books know another group with the same name. When Tresor signed the duo in mid-1990s, Holy Ghost rose to awareness with the albums “The Mind Control of Candy Jones” and “Art Lukm Suite” plus with several EPs recorded for the Berlin label.

Two UK fellows, Gary Griffith and Leon Thomson, had been in the business since acid house swept over the island and brought out several releases on their own Holy Ghost Inc label. Largely unaware of the duo’s pre-Tresor feats, I came across this EP in a crate-digging session and was not shun off by a techno-naive stance of the piece. This is a techno release where the A-side runs largely on breakbeats, while on the flip  “Wildlife On One” drops the speed for a beatless track with pulsating synths. “Daybreak Siren” rewards all hardliners with a tight banger – only the sample of a crowing rooster is not necessary.