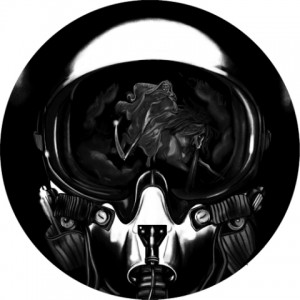 A new toy for all top guns out there, to be released on Crème Organization’s Eclipse series in February 2012. After spotting a teaser of bleepy acid house “Alle Piloten mit in den Tod” on Youtube, a full set of audio clips was now uploaded by the label.
In “Nur die F-104” German vocals narrate about the controversial existence of a troubled jet fighter, “Nachbrenner” transmits the feel of flying at 15,000 km above the Earth, while slo-mo acid eats in “Grössenwahn” and “Pilot Was Killed”, the latter sounding like a genuine requiem.
I guess that Jagdstaffel 66 is not really a newcomer, but Rude 66. If you know his track “Die Stärke der vernichtenden Schläge” from the LP “Stalingrad Vol.1”, the parallels are obvious.