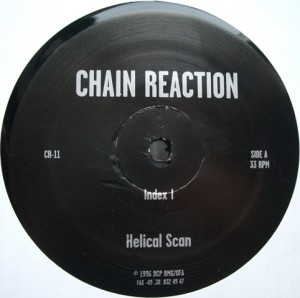 If I should be in an awkward situation to choose only one release from the Chain Reaction’s amazing catalog, I would point the finger to “Index” by Helical Scan. Released as one-off project by Robert Henke AKA Monolake in 1996, it’s a tour de force of mechanic sound language.
Especially the A-side’s “Index I” goes well beyond the definition of dub techno, if we think of Basic Channel or Deep Chord classics. Kicking off with nautical hum and minimalistic beat, it arises into a complex dub construction hammering like a robust hydraulic press throughout entire 10+ minutes. “Index II” on the B-side ups the tempo considerably and adds a set of shimmering dub sequences closer to the end. A really massive experience and it’s worth mentioning a remastered version of the record, published some years ago on Monolake’s own label.