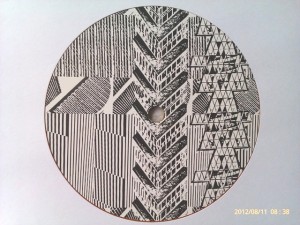 Those finding Dominick Fernow’s electronic crusades too byzantine might seek comfort in (or on) Bed Of Nails, a new label set up by the Vatican Shadow fellow. After inaugural “September Cell” by the label curator, clearly appealing to the out-of-box dancefloor, the second slot allocated to Bronze Age confirms the label’s ambitions to blend techno, industrial and experimental for some marvelous techno-boogie.
Bronze Age is a new act by Kris Lapke, so far hiding behind the names Alberich and Louder Than Life, in addition contributing to nerve damages at Hospital Productions.
His “Antiquated Futurism”, a three-tracker on 45 RPM, gets a jump start with grinding synth lines and restless drum patterns in “Surviving Cultural Impedance”, to make it a petition against mediocrity. “Coupling Symbols” would be played at the reunion of EBM veterans carrying Front 242 badges and watching the thunder emerging from the distance. Although fluffy first bars create a false impression of facing a reincarnation of Robert Miles, “Modal Ingenuity” grows into a thrilling mindcontroller with prominent chords and stomping 4/4 bass while not hiding its trancy side. It’s the closest track to standard techno, but dwarfs similar attempts seeking chart mercy.
I will not second to Boomkat’s references to PCP/Acardipane or Woody McBride – the similarities are only vague – but still it’s a slamming EP and those liking FRAK, Pete Swanson or Container would find satisfaction here. The past is the present is the future.