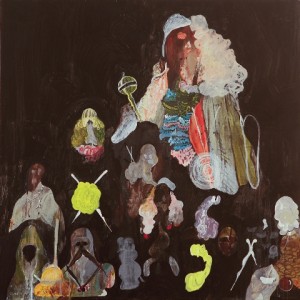 Altar Eagle. At first instance there was something uncanny in the name, good for a grim species overlooking humble crowd in a sanctuary, feeling very Gothic.
The truth is the opposite when the duo consisting of Brad Rose and his wife Eden Hemming Rose have completed a beautiful pop album in the sidelines of running ever-surprising Digitalis label.
The first impression of “Nightrunners” is that it’s made of the same fabric as Paco Sala’s recent debut LP on Digitalis: The same harmonic synth and smudged guitar setup combined with sultry female voice sounded very familiar. However Altar Eagle is operating on the next level with mature pop songs with a slight cold breeze. Yes I say pop because the album could be only vaguely classified under experimental, the main line of business for Digitalis. In a positive sense the band keeps in-the-middle-of-the-road approach conveying simple messages how music for lighter moments should be made. And yes, I said songs because it’s something that’s all about with Hemming’s voice lending a happy-go-lucky dimension to the album.
Partly sounding like my fellow Estonian Maria Minerva, Altar Eagle’s release creates unidentifiable but sweet associations with the music I have encountered over the years. Still thinking a joint tour with a warm-up band like St Etienne would be a good idea, for telling to the kids what brighter side of indie means. And I would invest in “Digital Gold Futures”, for sure.
Buy vinyl