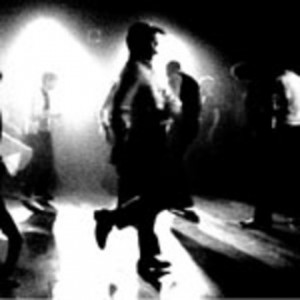 Not many people might have heard about Gnod but the group tells us there is life in Manchester after Happy Mondays and Joy Division. So far residing in the alternative and krautrock camp, the collective from UK Northwest now knocks on the door of strobe-lit clubs with a new pulsating LP.
Freshly out on the Irish imprint Trensmat, “Presents..Dwellings & Druss” deviates from the classic Madchester sound as it does in relation to the conventional floor fare, still able to address the techno faction. Playing essentially in the same league with Container and Pete Swanson, the group gives us three tracks filled with controlled noise and quivering beats in synthetic glazing.
Already the opener “Revelation 9” drives up the pulse with agile synth drumming but the real highlight is “20 Sides A Minute”. Firstly embraced by clasping percussion with an evil wink, a drilling sequence takes over without losing the steady beat control.
B-side is filled with a 16-minute opus called “Defeatism” which throws drone and ambient into the pot with Warp’s Artificial Intelligence electronics, exposing the sonic matter to the corrosion closer to the end.
The LP’s rattling and pulsating journey just confirms that in Gnod we trust, what else. And increasingly Trensmat Records deserves more attention, especially when next up on the label is wrenched electro-acid blast by The 15 Dead Minutes.