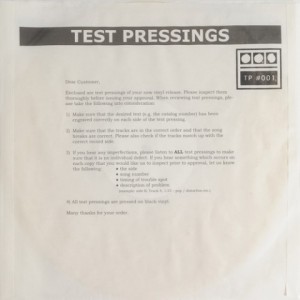 New full moon sessions by Demdike Stare, the act consisting of Miles Whitaker (check also his debut LP on Modern Love) and Sean Canty, whose extraordinary courage for wicked sound explorations have attributed to them a cult status. The duo’s two-tracker inaugurates a new series on Modern Love’s labeled as Testpressing, which kicks off with two sides full of insane electronics.
In “Collision” after an apocalyptic intro seismic bass seizes the power and throws us back to the heyday of drum’n’bass, in a heavy and noisy interpretation. On the flip “Misappropriation” is a clear winner with a captivating slow-motion percussive revelry for mingling with the crowd in Oriental bazars.
“Testpressing#001” is not a timeless achievement but still a decent addition in Modern Love’s catalog. Labeled as “limited edition” by Boomkat, the actual number of copies pressed is unknown, though.