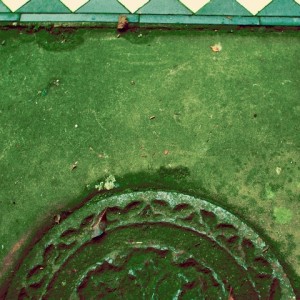 Once again I would like to meet Zakaria in Sefrou. On a Friday night when the harira stalls are open in the dusky side streets we bump into each other amid lively noise of the central market. He, with a smile short of some teeth, shows good command of English and fondly recalls the days when Jimi Hendrix was around, and not only him. Zakaria comes from the Moroccan hippie generation and knows the power of guitars and hand claps. We both might not have heard about Leven Signs but it’s never too late to learn about the enticing music after the flower power and before Panda Bear and Animal Collective.
Initially released in 1985, Leven Signs’s album “Hemp Is Here” is another long-lost oddity reissued by Digitalis. Back then the UK duo Peter Karkut and Maggie Turner opted for a daring blend of synth-tinged psych-folk and Oriental exotica spiced with cellos, trumpets and various breeds of percussion. The album might easily generate unexpected cultural associations, from James Ivory movies to Arabian tales.
The extraordinary world of Leven Signs opens with khat-chewing dervishes and Hare Krishna sisters riding the sand dunes in “Our Position Vanishes”, which leads the thoughts to Spengler and the Decline of the Western World. “Prague Spring” is a hearty and hazy song while “Iraj” returns to Oriental paths. In “La Luna” we feel the dramatic breath of punky wave and Karl Biscuit before to be catapulted to the Middle Ages with “Sedes Sapientiae”.
Another great find is “Carry The Torch” which features drum’n’bass from the times it was not even officially invented and branded. A track that tops all the previous is the organ-driven “Das Seal” – mesmerizing and bleepy cathedral ceremony and a juicy target for talents seeking exciting remix duties.
The synth-obsessed and always surprising imprint from Tulsa resumes with success its educational mission about the hidden talents of the past and today. Now just ride the sound dunes with Leven Signs.