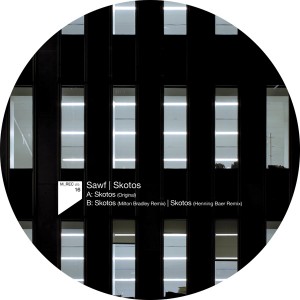 Italian imprint M_Rec Ltd, brainchild of the Milanese DJ and Producer Max_M, has been a publishing platform for the label owner, along with Cassegrain, Giorgio Gigli, Samuli Kemppi, Juho Kahilainen and many more. Now Sawf, a Greek techno man concealing his real identity, has landed on the 16th release of M_Rec Ltd to bring us “Skotos” with two guest remixes.
Whereas the original, which would cater to the before-midnight crowd, starts rather unspectacularly. In the onset we have bass, then come hi-hats and hum followed by a grim modulated vocal sample that firstly sounds quite irritating but finally achieves a haunting effect.
On the flip two solid tune-ups, starting with Berlin’s Milton Bradley who in expected manner raises darkness quotient with dramatic grinding noise and asthmatic funk reminding of early Cristian Vogel. Thereafter my first and also positive encounter with another Berliner Henning Baer. The vocal sample proclaiming understand resurfaces in the monotone and stomping take rolling confidently with a pinch of distorted snares, all in all saying that Baer’s “Skotos” is the highlight of the release.