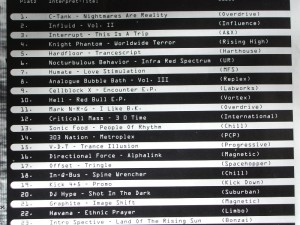 Compiled by DJ Andy Düx in 1993 for the seminal Groove mag from Frankfurt, this chart reflects the heyday of gabber and hard (acid) trance with many pivotal German labels and artists listed. The first spot was grabbed by “Nightmares Are Reality”, a growling and pounding LP by C-Tank, an act set up by three producers who also operated as Humanoids From The Deep. C-Tank was a flagship of Overdrive, one of the hardcore bastions that time run by Düx himself. The militant title track fires with mad kick drum and “Evil Dead” samples.

From Influence Recordings came Influid II sampling Art Of Noise, Ministry and The Orb, for another relentless gabber strike.

Instead of listing another sounds from hell, true Detroit techno, ranked sixth here, deserves attention in the capacity of the Suburban Knight and his rough “Infra Red Spectrum” from “Nocturbulous Behavior EP”.