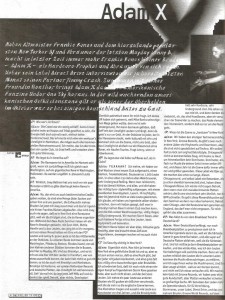 Adam Mitchell aka Adam X is one of the few faces of the early nineties techno scene who is not thinking about the retirement. The Brooklyn native and current Berlin resident runs the Sonic Groove label for cutting-edge techno sounds and keeps himself busy with new releases, as Adam X and under the Traversable Wormhole moniker.
Recently a few interesting write-ups have been published about him, like Richard Brophy’s feature “Fusing the past with the future” on Juno Plus or Adam X’s thoughts about his early musical influences for the Tea and Techno blog.
Here comes a call from the past: As a driving force of the American techno underground, Adam X was interviewed by German techno mag Frontpage at the end of November 1992. Here’s the translation, with some comments added by myself in square brackets.

In addition to grandmaster Frankie Bones and Lenny D, in Germany the most popular New York DJ and top performer of the last Mayday, a new top gun and hardcore prophet is rising from the Big Apple, Adam X who is Bones’s younger brother. Recently we interviewed his pal Jimmy Crash about their label Direct Drive. Together with his girlfriend Heather Adam X publishes Under One Sky, a fanzine, and he’s a guy to watch in the proliferating American East Coast scene.