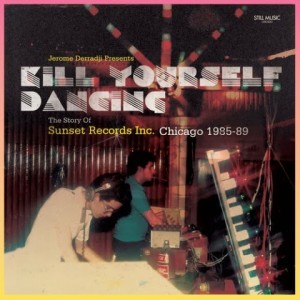 One can’t deny unique aura of the Chicago house heritage and those archives seem endless, as tracks from the scene’s very young years resurface time after time.
Still Music owner Jerome Derradji is on a mission to explore the vaults of the Windy City, now continuing the tour in Chicago’s b(l)ack catalog with the story of Sunset Records Inc. from 1985 to 1989.
As expressed in jacking rhythms of the title track “Kill Yourself Dancing” by Razz, the compilation includes a cross-section of tunes that might have been ripe both for the US and Euro floors at the end of 1980s, as a fusion of italo and black disco funk.
It contains cuts for Mediterranean resorts (Master Plan’s “Electric Baile”) and psychotic soirees (“It Could Be Acid”, “White Knight Jacks” by White Knight), not forgetting theatrical jackers (“Demons” by White Knight again) and sensual smoothness (“Jail Bait” by Ben Mays).

Euphoric highlight is horn-backed “Face The Music” by Boom Boom & Master Plan in two mixes while soulful girl power comes up in Matt Warren’s “The Way To My Heart”. Intermezzo “Doo Doo Da” reminds strongly of the similarly titled techno track later dragged to the world fame by Robotman aka Richie Hawtin. All in all a nice flashback, which, however, sticks to the dominating Chi-town club sound and lacks more experimental cuts.