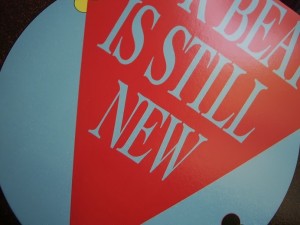 Something for the class of 1988. The Belgium-born new beat phenomenon has remained, surprisingly, largely untouched by the high tides of revival. Now exactly a Belgian label We Play House has launched a series of mini compilations on the theme.
“Agent Orange” is killing us softly with classic new beat synth stabs and Arabic sample centered on el purtugal or orange. The artist name Azab & Crybaby does not ring a bell but Juju & Jordash, the producers behind it, certainly do.
On his road to the world fame, Anonymous Are DJ Ironfist has set up a clapping beat box parade in “Frog March”, not being able to be separated from his piano. On the B-side TC & The Maxx Paxx, the alias of JD Twitch from Optimo, proclaims this is Belgium in stomping and acid-smelling “Just Like That”. For the end Prins Albert is hot on the heels of Throbbing Gristle and Jarre in “Dies Ist Belgien”, topped with quaint German spoken word for sweet and sleazy moments in the vintage corner.
Actually four EPs are planned, with many well-known producers joining the game under the new beat-styled monikers. Back to the old school.