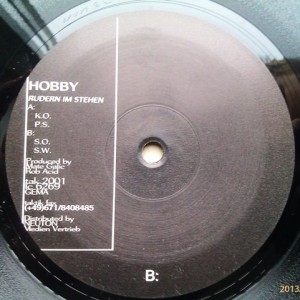 Of two artists behind the release, Croatian native Mate Galić was in the frontline of early German techno and hardtrance movement. Later he could not resist the call of shimmering screens and became a host for VIVA music channel, before moving to managerial positions at Native Instruments and being now the company’s CTO/President. Under a number of guises, Robert Babicz aka Rob Acid from Cologne has been integral part of the German scene and he’s still busy releasing new material.

Although mainly associated with rave crowds, the two have found several alternatives to accomplish their creativity, if only to mention Galic’s Bion moniker and his and Babicz’s one-off vehicle Hobby, under the discussion here.

“Rudern Im Stehen” has well stood the test of time and offers four interpretations of hum-infected minimalism. After the disoriented start a vast polygon of bass testing grounds unfolds in “K.O.” while in “P.S.” tense drone raises anticipation to become confronted with ticking percussion. In the presence of subs “S.O.” emits stripped down minimalist tones while “S.W.” is the most floor-friendly cut with subtle acid line and obscure voices. One of those underrated releases.