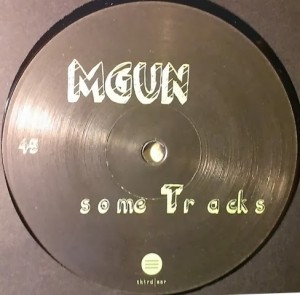 It seems that artistically MGUN lodges in isolation, to be not distracted by the foodcraft of trendy music caterers. A composer going his own way, MGUN has dropped classy releases on The Trilogy Tapes, Berceuse Heroique, Don’t Be Afraid – all choice labels in 2013 – and has now landed on Hackney-based and aptly named Third Ear Recordings.

Bluntly titled “Some Tracks” tells further tales about MGUN’s talent and bass obsession. Sounding both assertive and ethereal, lights are dimmed in revolving boogie funk “Extort”, introducing the rougher A-side. Serious fun goes on in “Mean While”, spelled exactly like this, which would generate notifications by the neighbors due to tremors from beneath being fused with modulated alien speak. B-side opener “Fiber” is hued by lighter pads stepping over a neo-disco groove while in “Mask” signals and hi-hats are placed over a fat stomp and “Taft” goes dizzy with a psyched-out groove. An EP offering plenty of variety between techno and house.