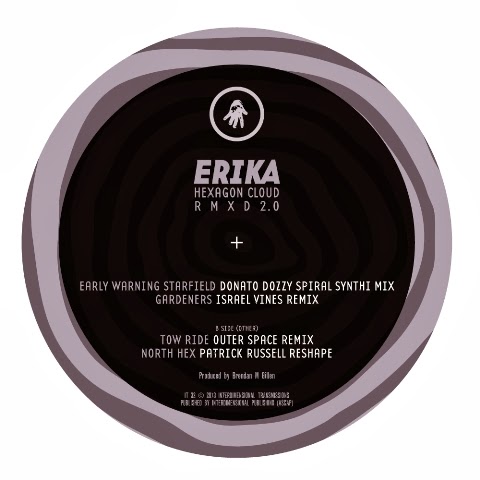 From the mid-90s a lot was cooking on Interdimensional Transmissions (IT) when the Detroit label was spearheading the electro revival in many fronts. IT was praised for the weighty “From Beyond” series and became a significant platform for its founding collective Ectomorph and contemporaries like I-F and GD Luxxe.
During last decade we have seen only occasional releases from IT, including the album “Hexagon Cloud” by Ectomorph member Erika Sherman. Of that the first batch of remixes emerged last year, by Marcellus Pittman, Orphx and BMG and now another edition comes with “Hexagon Cloud Rmxd 2.0”.
It’s an impressive package without any weak links. Donato Dozzy trades worldwide nowadays and couldn’t miss the opportunity to produce Spiral Synthi Mix of “Early Warning Starfield”, resulting in a psychedelic and abundant floater propelled by helicopter synth line. Going to even higher spheres, Dozzy’s digital-exclusive Bioclock mix is like a collab of cosmic tribesmen and Klaus Schulze.
Next up is Detroit native and L.A. resident Israel Vines, who recently impressed with a bouncing remix for Stave’s EP for Trensmat. He’s an artist to watch this year and for “Gardeners” drops a fat 808-driven version with subtle dreamy notes. Opening with Cosmic Baby piano, Outer Space lends to “Tow Ride” a touch of Milky Way romantics with the help of growling synth curves. A true Midwest veteran Patrick Russell wraps it up, playing with steaming and tweaking modulations in “North Hex” reshape. Cool.