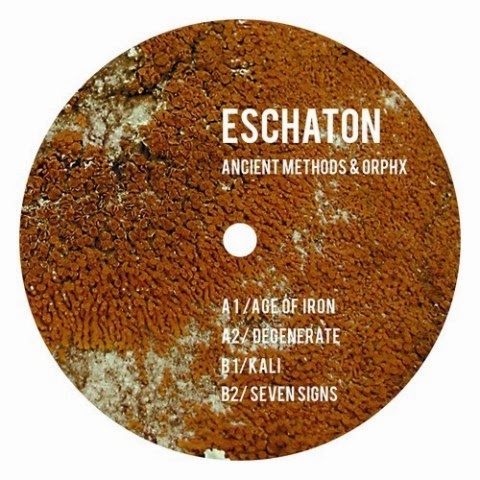 Ancient Methods and Orphx are Eschaton, which smells like a dream collab of industrial techno. Canadians Christina Sealey and Richard Oddie emerged with Orphx in 1993 and now boast an extensive back catalog of hard-edged sounds. The era of Ancient Methods started in 2007 and the act, currently one-man operation of Trias, has vigorously extracted the blackest matter from the depths of electronic music.
The meet-up of two outfits happens on the Belgian imprint Token with a rumbling session. The first clash opens up in “Age Of Iron”, a forceful ode to metal in the middle of a torchlit battlefield of the ancients. Survivors will find the shelter in “Kali”, akin to mid-90’s Force Inc techno funk topped with bastard voice effects. On the flip “Degenerate” comes with Ancient Methods steely kicks to climb a rhythm ladder for a proper floor shake-up and drum-crazy “Seven Signs” sounds very much Orphx with swirling analog oscillations for full-bodied dynamics.
Eschaton balances between destructive urges of Ancient Methods and Orphx’s hardware obsession, not necessarily targeting techno’s darkest corners. But it’s still a brisk beginning of the end.