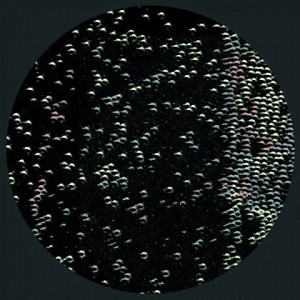 Well-known hardliners from Repitch expand the roster with two famed producers. Berlin’s Sleeparchive aka Roger Semsroth has gone a long way after emerging in 2004 with bleepy, Sähkö-inspired minimalism in “Recycle EP”. Recent outings on Tresor and some remix duties have exposed the artist’s rugged side and it is not any different in the new split EP.
Whereas the recycling factor cannot be overseen: Darksome opener “Fifth Station” is a solid reminder of 1990s hardware jams of Downwards and consorts, from the times before the schranz hit. Closing the A-side, “White Angel Breadline” approaches Sleeparchive’s early minimalist swing and simultaneously refers to old Plus 8 material, the bass line going like in “F.U. 2” by F.U.S.E. It is important to mention that two locked grooves inbetween are brilliant DJ tools for eternity, “Loop 1” successfully tested in this mix.
Then from Berlin to Buffalo, for two tracks by Mike Parker, a man with even longer production experience. It was only recently when I learned that 20 years ago Parker was behind “Belong” by Trybet, a project which paved the way to Parker’s own Geophone label in 1997.
Lecturing fine art at the State University of New York in Buffalo, Parker is well attached to the life outside the music and his material reflects a rational, precise production style. Rather dry, even scholastic approach to the programming has been changing gradually in favor of rougher tracks, recently heard on Geophone and Mote Evolver.
Definitely, the signing for Repitch was an invitation to sound wild and this is what Parker exactly does here. “Flying Nerves” is a sonic expression of neurogenesis in the subgranular zone, with nerve cells bombed by bloated textures. The second one, “Lustrum” makes a symbolic nod to his recent album “Lustrations” on Prologue, running on razor-sharp sequence and maddening bass to the fringes of hypnosis. Serious tools for catering hungry techno crowds.