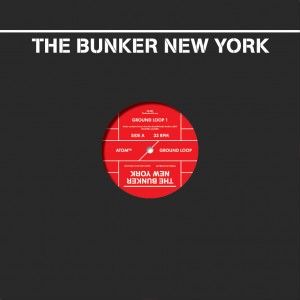 Welcome to analog hell for a pure old school mindf***. After five test presses, Bunker NY has finally approved a tool that stands out in the 2014 techno landscape, brought to us by the huge talent of Atom™.

Having started with the EBM act Lassigue Bendthaus in antic 1980s, Uwe Schmidt aka Atom™ has survived as an artist up to our days and after passing through sticky warehouses, Latin electro cabarets and sound exhibition areas, another brief but concise chapter in his vast catalog is now complete.

Drawn from Atom™ live material that was premiered at the Berghain in May 2013, “Ground Loop” is a return to Schmidt’s rave-smelling years as Atomu Shinzo or “i”, two outstanding projects from the beginning of the 1990s.

In “Ground Loop 1”, after a lengthy intro for observing the skyline illumination, corrosive bass line emerges and a rusty robot keeps repeating acid with increasing frequency. After dauntless ride in a loop machine and drilling acid sequences (think of Mike Dred’s “Macrocosm”), a padded landing wraps up most intense eleven minutes that force to grab an imaginary steering wheel and dash through the night.

Also the B-side awakens with deeply breathing drone but the acid line is just lurking behind the corner to reclaim the city with intrepid bass challenging sweetish disco layers. Nothing else than Schmidt’s genius mind in unison with the hardware.

Similarly structured tracks, where catharsis is placed between beatless intros and outros, extract the best from the evolution real hard trance and hypnotic acid. Perfect club tools by the maestro.