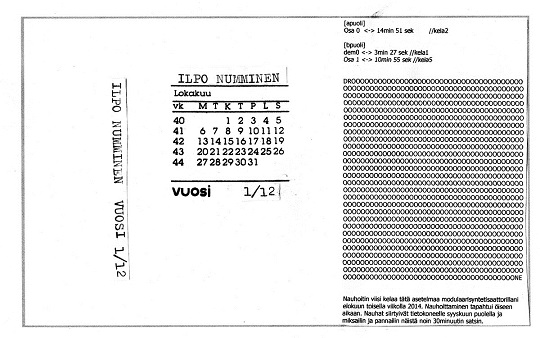 Thirty-year old Ilpo Numminen is a teacher in Finland who plays modular synth and repairs his rubber boots with bicycle tire patches. His fashion preferences consist of dad’s old coat from the 1990s, sweatshirt from Numminen’s elementary school years and glasses found in a second-hand store.

The vintage look is an attempt for conscious understatement, which cannot be said about the Finn’s music and the inaugural release of VUOSI (‘year’ in Finnish) series. It is a project of four sound artists, Ilpo Numminen, J. Koho, Olli Aarni, Tuukka Salonen, who have decided to produce twelve tape releases during a year. A true vintage man, Numminen opened the series in October with a tape recorded to reel-to-reel machine at nighttime. The cassette sold out but luckily, there is a digital version.

Moving at the outer borders of electronic music, Numminen’s sound is rather inspired by solar energy than oppressive darkness. It was the shortest track “Dem0”, aired by Avaruusromua radio program, which really shook me awake when preparing Sunday morning coffee. After suspecting fridge malfunction, I became aware of the odd noise Numminen had produced for “Vuosi 1/12”. The other two cuts turned out as compelling: After a section of electromagnetic interference, the 15 minutes of “Osa 0” offer frosty micronoise between passages of emptiness. “Osa 1” is another long, 11-minute piece built on a minimalist loop and swerving drone pattern.